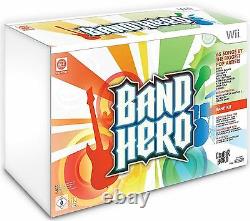 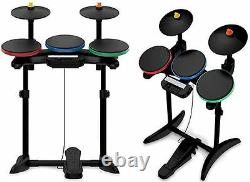 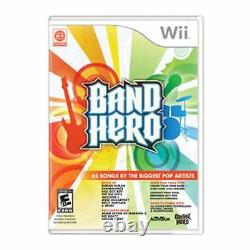 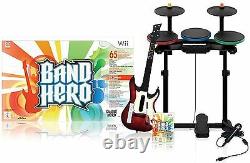 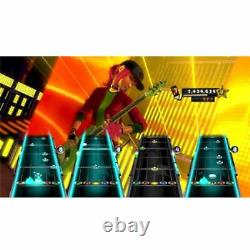 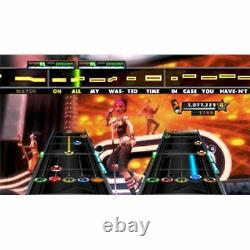 Wireless Digital Band Hero Guitar with receiver & shoulder strap. Rock to the Beat â Band Hero includes the most fun music that brings friends and family of all ages together to sing, play guitar, or drum to a wide variety of todayâs chart topping hits and most recognizable anthems.

The game features an explosive on-disc set list of more than 65 tracks from the hottest new bands and classic artists, including Maroon 5, Jesse McCartney, Go-Goâs, The Turtles and Janet Jackson. Letâs Get this Party Started!

Â Novice and expert players alike will find it easier than ever to jump in and jam out with friends and family thanks to Band Heroâs Party Play mode. Party Play inserts players straight into the action from the start-up menu with the press of a button allowing them to join in, drop out, or switch personal options at any time without fear of failing the song or interrupting the jam session. Put The Band Together Your Way â In Band Hero gamers are free to create the experience they want by tailoring their band to suit their style. People can play alone or select any combination of multiple vocalists, bassists, drummers or guitarists to create their own band and rock with, in Band Hero. Step Up to the Challenge â A little competition never hurt anyone!

Band Heroâs RockFest mode is a collection of challenges at varying difficulties designed for up to four players locally and up to eight players online. Momentum â Song difficulty level changes with player performance. Elimination â Each song is divided into segments, after each segment, the player with the lowest score will be eliminated from the game. Do or Die â Missing any three notes for a song section temporarily knocks players out of the game and keeps them from scoring. Streakers â Players are awarded points whenever their current note streak is a multiple of 10.

Perfectionist â Points will be awarded to the player who hits the highest percentage of notes in each section of a song. Pro Face Off â Head-to-head battle where players all play the same song on the same difficulty with the same instrument. Live In the Moment â Capturing the essence of being in a big-named band and nailing those memorable sections of popular songs is what Band Heroâs Band Moments is all about. Hitting all the notes in a special section earns bands bonus multipliers and creates the ultimate sense of accomplishment as the crowd screams for more. The Ultimate Jukebox â Further expanding upon the hours of nonstop on-disc entertainment in Band Hero, is the ability for fans to play Guitar HeroÂ® World Tourâs downloadable content in the game, utilizing all of the upgrades and features in Band Hero.

Sing Any Way You Want â A classic karaoke mode where up-to four players can showcase their vocal chops, Sing-Along allows players to perform any song from the entire set list, without worrying about scores or failing out. Make and Share Music â Band Hero features the innovative GHTM Studio and GHTunessm first introduced in Guitar Hero World Tour. Produce hits in the redesigned music studio with improved editing tools, new guitar samples and mix patterns, or budding musicians can head over to GH? Jam and rock out with more than 400 easy-to-use music patterns for any instrument to create recordings that can be refined in GHMix 2.0.

Up to 50 songs can be uploaded to GHTunes giving players the chance to share what could be the next breakout hit! Rock With Your Wii â Multiple exclusive game modes for Nintendo fans will let living room rock stars interact with their music and friends like never before.

Band Hero on the Nintendo Wii features an entirely unique Wii/DS connectivity ability that lets more then just the band call the shots. While players and their bands are rocking away with Band Hero (Wii version), family and friends who own DS and DSIâs can update and change the bandâs set list on the fly giving them the ability to experience the performance they want. In Mii Freestyle Mode, gamers can rock any way they want with their custom Miis for a unique experience that connects players to the music and adds another layer of personalization to the game. Players can jam with the Guitar Hero controllers and create their own note tracks on the fly utilizing multiple music genres or simply rock out using the Wii remote and Nunchuk to âair drum.

Â The new Mii Freestyle Stage Manager allows DS players in the audience to get in on the action by controlling lightshows, changing cameras and even igniting pyrotechnics! And, for the first time, fans will be able to capture videos of their Mii rocking out and share them with other Wii owners. Nintendo DS fans can experience the life of a band roadie thanks to the brand new Roadie Battle mode. Up to two DS players can connect with two Band Hero Wii guitar players for an intense competition.

While the guitar players rock out on stage, the DS players frantically navigate their virtual roadie from one side of the stage to the other trying to sabotage opponentsâ equipment while repairing any damage to their own. For owners of both Band Hero (Wii version) and Band Hero on the Nintendo DS Lite connecting the two games wirelessly will unlock extra gameplay and content. Band Hero Wii players can download dozens of Fan Request challenges directly into their Nintendo DS Liteâs Band Hero career.

Completing these Fan Request challenges will unlock awards and exclusive characters that are playable within both Band Hero games. Complete Band Hero Song list. Ben Harper and the Innocent Criminals. I Want You to Want Me (live). Hang Me Up To Dry.

Do You Really Want To Hurt Me. Santa Monica (Watch The World Die).

Black Horse and the Cherry Tree. I Heard It Through The Grapevine. The Impression That I Get.

Every Rose Has Its Thorn. Robbie Williams and Kylie Minogue. If You Could Only See.

For local pick-ups, we accept cash or card. Please allow 24 hours for your tracking information to update and show movement/scans. Your satisfaction is our #1 goal! Loot Hive is a small business in Minnesota that employs 30 awesome people.