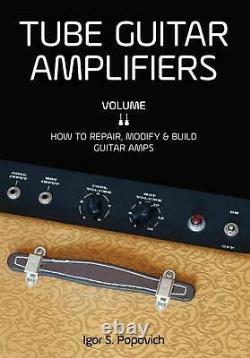 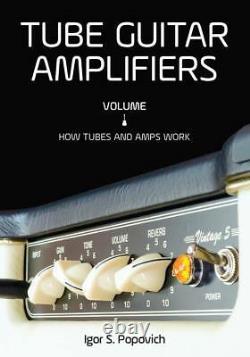 The most complete and practical modern reference on tube guitar amps. Tube Guitar Amplifiers Volume 1 and 2. Destined to become a true classic in its field, this unique DIY design & construction manual presents the theory and practice of amplifier design & construction in a balanced way. The first three chapters of this unique book cover introductory topics such as basic electronic circuits and passive components (resistors, capacitors, inductors), the building blocks of tube amplifiers. Audio amplifiers are also investigated as black boxes, from the outside perspective, and important concepts such as spectra, gain, bandwidth and distortion are introduced. Chapters four to six explain operational principles behind vacuum tubes (diodes, triodes, tetrodes and pentodes), and their use as rectifiers and active amplification components in guitar amps. The rest of the book progresses through various stages of guitar amps, from input circuits and preamplifier stages, through tone control circuits and analog effects, to output or power stages. After the in-depth coverage of tube power supplies, single-ended output stages (triode, pentode and ultralinear) are covered first, followed by phase inverters and push-pull circuits. The associated controls such as Presence, Resonance and Texture are also discussed, using Peavey ValveKing 212 amp as a case study. Despite claims by their manufacturers, many modern guitar amps arent all tube at all, but hybrid designs. Most have a single tube in preamp stages to color the sound, and a cheap solid state output stage (usually using integrated circuits).

Others take the opposite approach, choosing semiconductor preamp stages and a tubed power stage. For that reason solid state (semiconductor) components and amplifiers are covered here briefly, together with two examples of hybrid amps. This practical DIY manual is richly and professionally illustrated with photographs of tubes, components and amplifiers, circuit diagrams, tube pinouts, curves and loadlines, graphs and charts.

These valuable illustrations make it faster and easier to comprehend issues, a picture is truly worth a thousand words! All the information required to design and build tube guitar amplifiers is compiled in one place.

With over 500+ photos and schematics, this practical book is a "must have" for guitar players, amplifier designers & builders! In Volume 1 we've laid the groundwork for more practical aspects of guitar amps that will be covered in this volume, namely amp troubleshooting & repair, modifications & improvements, and construction (building). Out of necessity, Volume 1 was a bit more theoretical of the two. Understanding operational principles and design & analysis tools is necessary to fully master the hands-on stuff, so you will know not only what should be done and how, but also why or why not.

The first two chapters of this volume deal with the final stages in the amplification chain, namely output transformers, loudspeakers, attenuators and headphone/line out circuitry. Chapter 3 covers the basic troubleshooting and amplifier repair tools and methods. Chapter 4 discusses practical wiring, soldering and circuit modification issues seldom or never mentioned in other books.

Although numerous circuit modifications and improvements have been dispersed throughout both volumes, chapters 5 and 6 cover two specific areas where mods are particularly effective and noticeable, namely in power supplies and in tone changes through simple changes such as tube and component substitutions. Chapter 7 is a review and analysis of a few modern push-pull amplifiers such as Orange Tiny Terror, Jet City JCA20H, Fender Excelsior and Epiphone Electar Century. These case studies illustrate common issues and improvement options. The DIY project section (last five chapters) will take you through a dozen or so unique amplifier designs, some single-ended, other of push-pull, using different preamp and less common output tubes, such as 12FQ8, 12A6, 5687, 12AU7, 6SN7, 6AR6, 6BX7, 6EM7, ECL86 and PL508. Of course, there are also designs and DIY projects with much loved favorites such as EL84, 6V6, 6L6, EL34, and 7027A.

Finally, we look at examples of vintage tube gear that already contain a tube amplifier inside and how to quickly and easily convert them into guitar amps. OUTPUT AND INTERSTAGE TRANSFORMERS FOR TUBE GUITAR AMPS. LOUDSPEAKERS, OUTPUT ATTENUATORS & HEADPHONE CIRCUITS.

DIY constructors who want to build, service or modify tube guitar amps. Buyers and sellers of tube guitar amps who need a better understanding of tube technology. Electronic technicians and engineers familiar with solid state devices and amps, who want to expand their knowledge of tubes and their circuits. Anyone who wants to learn how to design, build, test, fix, or upgrade tube guitar amps. The item "Tube Guitar Amplifiers, Volumes 1 and 2, NEW, both books set" is in sale since Tuesday, July 31, 2018.

This item is in the category "Books, Comics & Magazines\Books". The seller is "tubeampdvds" and is located in Canning Vale, Western Australia. This item can be shipped worldwide.